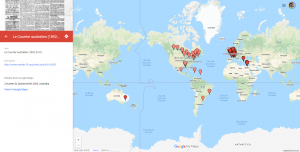 Description de la Bilbiothèque de l'Université Simon Fraser : "The French-language newspaper Le Courrier d’Essex began publishing in 1884 in Windsor. In 1885 its name was changed to Le Courrier de l’Ouest, expanding its reach to serve French communities outside Essex County. It ceased publication altogether in 1886. It appears to have been published at irregular intervals and most issues do not survive or are incomplete. Those pages that are available, however, are a fascinating testament to its time and place. Coverage of the Riel Rebellion, for example, mingles with international news, religious instruction, poems and anecdotes for family reading, and local advertising."

Description du site de la Bibliothèque de l'Université Simon Fraser : "The French-language newspaper Le Courrier d'Outaouais was published from 1869 to 1876 in Ottawa. Publication may have been irregular, and not all issues are available or complete. We include here several issues of a newspaper called Le Courrier d’Ottawa, published in the 1860s, which may have been a precursor to Le Courrier d’Outaouais. The earlier publication described its mission to be "An entity capable of defending their interests, and able to appreciate their position regarding Canadian nationality." The second publication described its coverage as "politics, literature, commerce, industry and agriculture."

"This short-lived weekly newspaper (May to December 1888) was founded in St. Boniface by James Prendergast, Provincial Secretary in the newly-formed Liberal government under Thomas Greenway. The editor was former M.P. for Ste. Agathe, Ernest Cyr. Its publication was in response to a need for a French language political newspaper for the provincial Liberal party. The newspaper could not gain the support of the staunchly Conservative population of St. Boniface, and disappeared following Cyr’s defeat in the provincial election in June 1888" (Manitobia, Digital Ressources on Manitoba History).

"A weekly founded January 27, 1898 by a group of Liberals including Morris M.P. Alphonse Martin, l’Écho du Manitoba had a specific goal. Laurier’s victory at the federal level and the Laurier-Greenway compromise of 1897 had revived the French Liberal party in Manitoba, which needed an official organ. Its program was simple: “our race, our language, our religion”. The last issue was published on July 20, 1905, when its editor Henri d’Hellencourt left Manitoba for Québec" (Manitobia, Digital Ressources on Manitoba History).

"La Libre Parole, a weekly, started May 4, 1916. Larger and more carefully laid-out than its predecessors, this Liberal newspaper could not compete with its Conservative rivals Le Manitoba and La Liberté and ceased publication in 1919. This digitized collection ends with the September 20, 1917 issue" (Manitobia, Digital Ressources on Manitoba History).

"Le Manitoba took over from Le Métis in 1881 its new title reflecting the changing demographic make-up of the province. It disappeared in 1925, losing a hard-fought battle against the Church-supported Conservative weekly, La Liberté. Weekly editions are available from October 13, 1881 to October 5, 1882 inclusive. It is published in a semi weekly format only from October 26, 1882 to October 18, 1883. For a short period, October 18, 1883 to January 10, 1884, it is published in both semi weekly and weekly editions. From January 17, 1884 until 1925, it is published weekly only (Manitobia, Digital Ressources on Manitoba History).

"L'Ouest Canadien was published weekly in St. Boniface from February 14 to August 14, 1889, when Prendergast left the Liberal cabinet because of the government’s plans to abolish official bilingualism and provincial funding to denominational schools" (Manitobia, Digital Ressources on Manitoba History).

The New Orleans Bee/ L’Abeille de la Nouvelle-Orléans was a French language newspaper published in New Orleans beginning on September 1, 1827. An English section was added three months later. The newspaper continued as a dual language publication until 1872 when the English portion was dropped and once again it became French only. Briefly [1829-1830] there was also a Spanish language section. The New Orleans Beewas originally published three times a week, but became a daily after a few years. Publication ceased in 1925.

Description du site de la bibliothèque de l'Université Simon Fraser : "The village of Matane, Québec, located on the Gaspé Peninsula directly across the St. Lawrence River from Baie-Comeau, was the site of a French agricultural settlement in the late 18th century. It remained a tiny community until the emergence of lumber and forestry industries in the late 19th century. The weekly town paper, Le Cri de L’Est, may have been published for only a year or two in 1911 and 1912, in the French language. It covered primarily news of the Gaspésie and Catholicism, and included family reading and local advertising. The issues available here date from March and April of 1912."